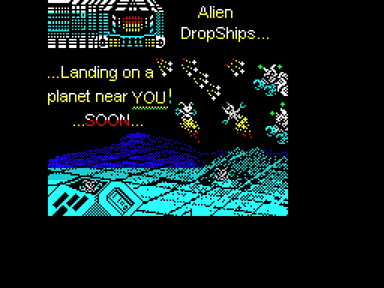 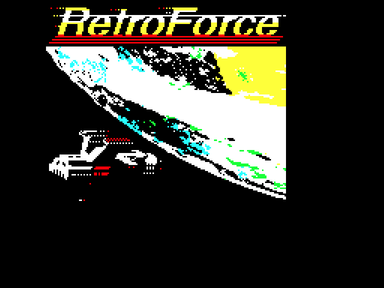 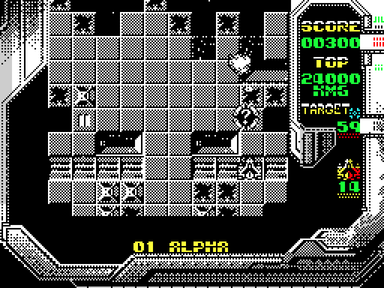 Today, we present before you, a pure 48k Spectrum game, requiring no special hardware beyond the original rubber key machine made famous by Sinclair. At the time of writing, we have squeezed in 24 levels (Alpha to Omega), basic beeper tunes, rudimentary sound effects, elaborate attack patterns and plenty of enemy types, leaving less than 100 bytes left over to spare in our game.

Our game, of course, is an interpretation of an old classic shooter, known as MegaForce. MegaForce, also known as StarForce, was essentially a vertical format shooter, that relied less on power ups and more on player skill. Its a game that was converted widely to consoles and other systems, but not to our humble Spectrum.

In the end, what we have here is less a port and more an interpretation of the original… To that end, we thought we might also go a step further, and blend a storyline in there too, to create
continuity with a previous shooter Climacus wrote, called RetroInvaders… Our game was thus named to reflect both these angles: It represents a bow to the original, and a nod towards our own
direction. This game is not just a conversion then, but also our creative bridge towards a possible future sequel… But, for now, we hope that you enjoy the game that is now set out before you…

Silence descended on the hall, as we took in the enormity of what was being broadcast from an Earth-based channel that had seen little action over these last 10 years. Our cell had waited incognito, inactive, but attentive for the best part of that time, waiting for a day such as this. Ten years of waiting was agony, but not as painful as that 3 second delay.

The delay, of course, was an inevitable side effect of temporal distortion when communicating across such vast distances…

Communication, as always, was to the point, and of necessity, infrequent. Today, however, marked something different. “…the last of their ships were swallowed by the event horizon…”
It took only half a second for us to process that message before the hall erupted in jeers of celebration.

I could barely hear over the jubilation of my comrades behind me, finding it necessary to shout over them for confirmation.
“We won?… Mission successful?…”
Even before he uttered the two words that would prove to be my correction, and the reason for this mission, we fell silent again at the sight of our commanders serious glare.

“Phase One…”, was all he said. Operation “Silent Night”, as we all knew consisted of two phases. The first of these involved the wholesale destruction of a string of mother ships guarding the infamous wormhole. For almost half a century, mankind endured continuous attacks originating beyond that celestial gate, from a faction known only as “The Unity”. Phase One
meant we got to finally nail that door shut.

Phase Two, however, was an entirely different matter. Phase one bought us peace, but only the completion of Phase Two could sustain it. A “Peace that will last” meant only one thing to our kind – radical death to “The Unity”. Such a Final Solution is a tall order for an under equipped cell such as ours, but was well within the remit of the Alpha Squad, whose main objective, was the delivery of a warhead that would make that possible.

Ah, the warhead… What a marvellous weapon… Salvaged from 40 years of alien technology meant for our destruction, scientists had constructed something that could effectively wipe away a whole solar system… Its use was never going to be something our species could witness first hand though…

And therein lies the problem: we have no way to verify whether the payload had been delivered, without compromising our assets.

Which brings us to Plan B and the activation of our sleeper cell… On this glorious day, we are to lead an assault team deep into enemy territory to take out as much of their infrastructure as possible. Anything we destroy, Alpha won’t have to; anything we leave, might compromise their ability to deliver the payload. Ultimately, we are the pointman for a human incursion that will finish the job. We are to clear the way for logistic craft, which will later seed the area with hardware that will lay dormant for any surviving Alpha team members who do make it across. Failing that, we are the last chance for mankind to strike deeply and directly at The Unity. Ideally, Alpha team will finish the job; failing that, we’ll at least go down in
history as those who extended the Peace in our Time…

Before the big boys can find their way into this part of the galaxy with their explosive payloads, your job is to clear away all targets and resistance found within the next 24 sectors ahead.

Targets are typically embedded within the sectors infrastructure, and can be many and varied. But this isn’t a sight seeing tour solider!! Each of the 24 sectors, Alpha to Omega, have a designated number of targets that must be destroyed, before you can get a crack at destroying that sectors guardian ship. This designated number, representing a percentage of the sectors industrial infra structure, and can be found on the right hand side of your control panel – for instance:

Failure to destroy the designated number of targets before level end, will force the player to have to replay that sector from the beginning again. Success in destroying all such targets however, will activate the sector guardian, who must be destroyed before proceeding further…

By default, this game involves both energy drainage and loss of life systems during play. This means contact with enemy shots will drain shield strength, but won’t necessarily prove fatal until your shield runs dry. Direct collision with enemy craft, however, will prove immediately fatal. The number of ships you have remaining, and a visual representation of shield strength, can both be seen together on the bottom right of your control panel:

For die-hard players with more skill, the options screen allows users to determine difficulty of game play by tinkering with how the game treats enemy shot and target collisions. Enemy shots can be made fatal, faster & more accurate, while map target collision detection can be turned on to add more avoidance to game play.

Neither of these settings should not be touched by players who are prone to fits of rage, panic attacks or unaccustomed to the masochism that comes from playing ZX games written before the 1990s… 😉

R-Type never made it this far out into the galaxy, so don’t expect heavy armaments in this game… 😉 That being said, your not totally defenceless… Flashing pickup icons do exist…
Typically, picking one of these up will grant one of the following:

1) Auto Fire – Perhaps the most useful asset your player can have, and the only weapons upgrade in this game.
2) Smart Bomb – An EMP blast that will immediately destroy all kinetic cybernetic craft.
3) Ground Blast – A smart bomb to clear away all ground based industrial targets.
4) Bonus Points – Not immediately useful… but save enough of these, and you might just get an extra life…

• Don’t be afraid to dive into enemy fire to avoid enemy ships.
• Sacrificing a life, to collect missed targets is worth it…
• Memorize those attack patterns!
• Players who linger at the back, risk everything in later levels.
• Weaving & dodging become essential in later game play levels.
• Get up close & personal when confronting level end guardians.
• Chose wisely between enemy craft or ground based targets…

24 Sectors are believed to exist just prior the area believed to house the species known only as, “The Unity”. Their demise won’t be accomplished by your craft though. You are tasked with clearing the way to secure safe passage for those that will fly ahead…

The first 11 sectors are partially known by navigational intelligence gathered over the last nine years, but sectors beyond LAMBDA are essentially unknown to humankind. It is believed that sectors MU onwards are color coded according to function, representing industrial, cybernetic and organic environments, but little can be said with certainty at this stage…

Beyond sector Omega, nobody can say what awaits… Thankfully, it won’t be your team that has to conduct that level of infiltration…

Day in the Life, A