Xelda, the Quest for the Golden Apple 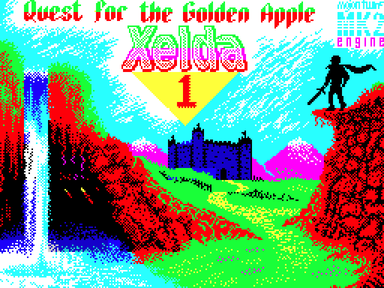 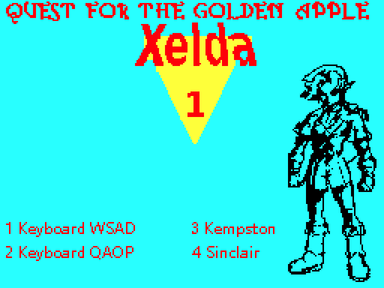 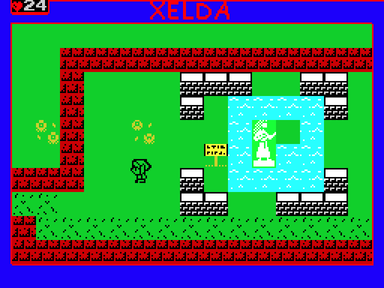 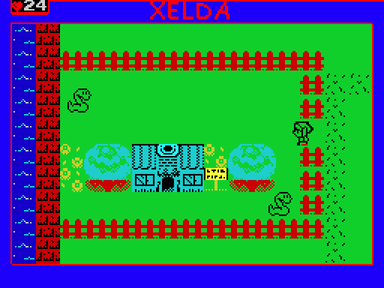 Xelda, the Quest for the Golden Apple

This game is not intended to be a clone of Zelda, nor follows the storyline of Zelda. The sprites and
title song are derivatives of the original work by Nintendo. However, if the sprites changed and the
title song changed, this game in no way would actually resemble Zelda. Therefor this game should not
interfere with the rights of Nintendo and their copyright on the game. This game is a top down
adventure that has been presented in many other games. This game is not meant for sale. It’s presented
as a programming exercise for entertainment only.

History of the game production

Xelda was originally a programming exercise within the Mojon Twins MK2 to see if a rather seamless large scale game could be programmed for the ZX Spectrum 128k machine within the MK2 framework. I wanted to make sure the game would work across all official and classic ZX Spectrum machines.

I originally started the programming exercise around November 2016 to see how I could link levels together within the MK2 framework and have variables stay global. I gave each level and jump to each level a unique identifier. From there I could walk to a specific way-point on each level and then pop to another level, retaining the global variables.

The original programming exercise was 5×5 screens within 4×4 levels, meaning each level was 5 screens wide and 5 screen tall and the game contained 4 levels wide and 4 levels tall, with 4 dungeons for 464 screens. That proved to be much too large, so I reprogrammed the script framework again. The second programming exercise was 4×5 screens within 4×4 levels and 4 dungeons for 420 screens, that was again too large, so I scaled back again. The third programming exercise was 4×5 screens within 3×3 levels and 4 dungeons for 260 screens, the
game seem to hold up. So I programmed with that iteration for about 2 months, placing in the level designs for the first 3 levels. I then realized I needed to have a level for inside houses. This would be a level disconnected from the rest of the game, places where you could go inside to receive a quest. This would add another 20 screens to the game, for a total of 280 rooms. This memory model held up for about a month before I started adding some puzzles. I started realizing I was running out of memory with only 3 levels programmed. I had to restart the entire design process again and scale back.

The memory model I finally settled on was 4×4 screens within 3×3 levels, 3 dungeons and 1 inside houses level for 208 screens (in theory, in practice it’s around 204 screens. This model stored all puzzles I wanted to throw into the game, all dialog and all logic. It is a tight squeeze to fit everything inside. All data is compressed, uncompressing on the fly for each level (this is part of the Mojon Twins Framework).

Script programming took quite some time, and was programmed and changed around for 9 months or so until it was about right. The MK2 C framework from the Mojon Twins had to be modified to take care of a few bugs. Since I am terrible at creating music, I used a procedural music creation program (CG Music) and plugged each note into WYZ tracker.

Finally came the beta test. Since at this point I have only played the game in individual sections, since playing the entire game each time I made a change or addition to the script would be too time consuming. I asked for assistance for testing, while I performed debugging. I had assistance with a few beta testers and together we were able to fix the bugs and I played through the game about 20 some odd times, repairing logic as I went and each time on fixing a bug, releasing a new beta and triggering a new replay. It currently take me about 2 ½ hours per play, so can be time consuming.

There could still be undiscovered bugs within the game, but the game is completable. I finally finished with the script on November 2017, a year after I started the original memory test.
I hope everyone enjoys the game as a lot of effort has been put into the game.

This game is open source and freeware. The Mojon Twins MK2 engine is given freely, however any game produced using their engine cannot be sold without being agreed to from the Mojon Twins. I never intended on selling the game, only to produce a game.

Xelda is a tribute game, it takes it’s inspiration almost directly from another famous game – Zelda. Which just so happened to be named after novelist F. Scott Fitzgerald wife Zelda Fitzgerald.
Even though the inspiration was taken from Zelda, this is not a direct copy of any of the Zelda games, it is its own entity. Spites and objects were “borrowed” from the real game, however that is an aesthetic only.

Xelda is a high adventure game, filled with puzzles, exploration, quests and fights. Your main quest is to find the Golden Apple which wards off the monsters that fill the island and terrorize it’s citizens. You will have to defeat puzzles which unlock passages, acquire objects or help others to further your quest.

Due to the sheer size of the game, it was written for 128K machines only (sorry for the 48k machine owners). However, with emulation and excellent machines like the ZX Uno, everyone who wants to play the game can.

This game is written by your humble programmer, Andy Dansby. My second computer that I owned was a Timex Sinclair 2068 which was the American Version of the ZX Spectrum. Sadly, it was mostly incompatible with the ZX Spectrum which along with poor marketing spelled the DOOM for that machine. However I you replaced the ROM, you could have a mostly compatible computer. That is what introduced me to the wonderful world of the ZX Spectrum.

This game however was not written without some support and there is credit due to others that helped me with the design.

Russell Glover – designer of level 4, the castle level, designer of most of the Graphics and my main sounding board for ideas. Russell diligently worked with me over the course of many months.

Cthonian Godkiller – for technical help with the script.

Casey Jones – some of the push block puzzles.

The Mojon Twins for writing the MK2 engine on which this games is built on.

This game was written using the MK2 engine, designed by the Mojon Twins. It’s a rather versatile game engine, allowing for multiple levels, sprites and scripting. This is my first game within the MK2 engine and the first game I have made as an adult.

This game will only load on a 128k version of the ZX Spectrum. All 128k Machines should be supported. This is built into the Mojon Twins MK2 engine. It has been tested on 128K +2a by one of
my beta testers (Steve Jedikiah). I have tested it on my ZX Uno, set as a 128K toast-rack and on a +3. Loading on an original 128k machine, is simple, navigate to Tape Loader and press enter, press play on your cassette player. The game take around 12 minutes to load.

Loading on a ZX Uno or on an ESXDOS equipped is slightly more complicated.

On a ZX Uno

Access your bios (CTRL ALT BACKSPACE)
Make sure that NMI-DivMMC is Enabled (If you want to use NMI for the file browser) also make sure your DivMMC is Enabled
Choose the Joystick option you want, I suggest Kempston
Make sure your machine is set for a 128K machine and reboot your ZX Uno
Once your Uno is booted, press CTRL-ALT-F5
Navigate to the directory that you have placed the Xelda.tap
Select the file
The file, will attempt to load and then reboot the spectrum
type in POKE 23388,16
type LOAD “”
On a physical ESXDOS interface
The process should be the same for a classic ZX Spectrum 128K with a ESXDOS compatible interface.
Press your NMI and select Xelda.tap. The game should load on selecting it. If not you may have to
POKE 23388,16
and
LOAD “”

The screen is laid out rather simply. You life force is on the top left, indicating how much life you have
until the game is over. Your inventory of collected objects is at the bottom of the screen. Your hero
which you control is all over the place.

Guide your hero around the island, talking to people to help guide you to your goal. Avoid or kill the monsters that block you from achieving your goal. Collect various object to open gates, flip switches to open passages and search the island until you find the “Golden Apple”. Solve the puzzles around the island to achieve your goal.

Dungeons are dark places, you will need some lighting to go inside. Even then, your light is not all
powerful, you can only see a limited distance. The darkness tends to hide things, monsters, switches,
passageways, be sure to explore thoroughly as a missed area might just hide a switch you are looking
for to open a gate.

The game is won, once you find the Golden Apple and return it to the statue. The sign has instructions
on what to do, just read the silly sign, it’s there on purpose.

I really do hope that you enjoy this game, I’ve put a lot of time into creating it. I had 3 goals in mind
when I created this game, first to create a good top down graphic adventure game that people might
enjoy playing, secondly to provide a template for others to use to create their own full scale MK2 game
that should be rather easy to understand with the source code that will be released. Finally, I intend to
popularize the MK2 engine for game creation. Enjoy.